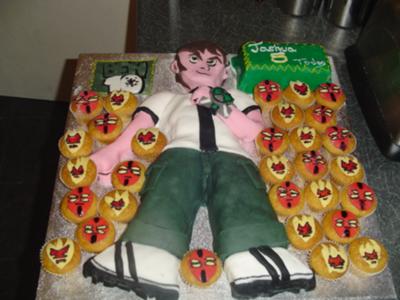 This cake was my first ever attempt at cake making. My son is a big BEN 10 fan and looking at the prices of shop bought cakes I decided I could do just as good a job for half the price...

I decided to make a cake in the figure of Ben 10. This was a 20 inch figure which consisted of chocolate sponge cake with a chocolate buttercream filling.

I made 2 sponges and filled them with the chocolate buttercream. Then I shaped them to form the Ben 10 figure. After shaping the cake into my Ben 10 figure, I covered the cake in fondant icing or frosting which was coloured in the appropriate colours e.g Green for the pants, white for the T-shirt etc.

I then finished the final touches with a paint brush and liquorice flavoring,

As the cake was taken to my sons school I decided to make 30 cupcakes or fairycakes so each of his school friends could enjoy it too.

On top of the cupcakes I added a face on an alien made from fondant icing which was couloured in either red or yellow and finished with black liquorice colouring.

The best thing about this cake making experience was the look on my son's face and all his class mates when the cake was brought out to him by his teacher...

I am one very happy and proud DAD !