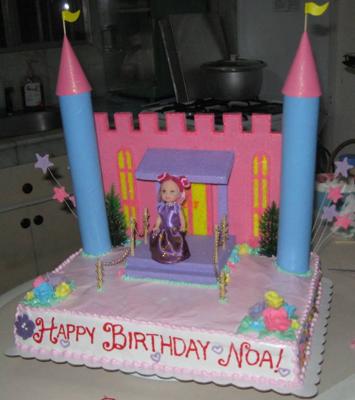 The only things I didn't make in this princess cake are the princess doll and the trees behind the 2 towers. I made the castle facade from styrofoam, painted them with acrylic paint and glossed it with glue.

The roses, apple blossoms & little violet hearts are made of royal icing. The pink and violet stars are also made of royal icing, sprinkled with colored sugar crystals, then attached to white floral wires. I made these ahead of time.

As for the cake, I baked a 10x14 single layer decadent chocolate cake, then frosted it with 2 kinds of icing. First is chocolate ganache, then white boiled icing. I feel that the white icing will not do justice to my decadent cake like a chocolate icing can.

I applied a thin pink icing on the top for a two-tone effect and beads-on-a-string border then placed small grass details on the bottom of the towers, steps, and castle with green icing and the tip of a pastry bag snipped off.

I used red gel for the birthday greeting. Stars on floral wires were placed on the sides of the two towers to represent fireworks. A cake is born out of pure ingenuity and imagination!