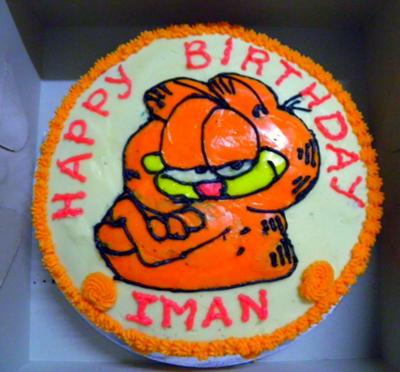 This Garfield birthday cake is one of the first cakes I had made for a friend. Her son's favorite cartoon character is Garfield. My friend wanted a chocolate cake weighing about 1 kg for the birthday. I recommended Walnut Chocolate Cake and she immediately agreed. I also decided that I will do an embossed Garfield cartoon on top of the cake.

I baked the walnut chocolate cake with a 10" round tin a day earlier and prepared the butter icing the same day. Unlike, some bakers, I prefer using butter icing which is done by beating butter (250g) with icing sugar weighing about 400g. I also added a teaspoon of vanilla extract to the mixture. The mixture should be thoroughly beating using a cake beater.

Once thoroughly mixed (using a spatula or spoon), I laid the icing on the cake and used a butter knife to get an even layer of icing on top.

Then I used a picture of Garfield which I printed from the internet and got it copied on a tracing paper. I made small holes around the lined picture and placed it on the cake. By pressing slowing at the holed lines, I managed to get dotted holes on top of the icing.

I added liquid orange color to part of the butter icing mixture, then using the same method as earlier for the base, I took a chunk of the orange colored icing and rolled it slightly with my fingers and placed it on the areas required. Then using a butter knife, I smoothed the laid icing. The same was done for the other colors, white, pink and yellow.

As for the black outline, I made royal icing by beating an egg white to a stiff froth and added about 225gm of icing sugar on the mixture and beating it well until it stands up in a peak. The royal icing mixture should be covered with a damp cloth to prevent crusting. I added a little black liquid color to the icing and using a piping bag I made the outline of the cake.

The outline of the cake (orange color) was done using a star nozzle.

Editors Note: Thanks so much for your detailed description! Your cake turned out beautifully!