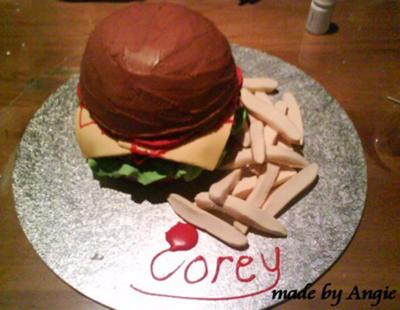 For this hamburger and fries cake I baked a vanilla cake in a 1.5 litre pyrex bowl. The cake was split in half to make the top and bottom of the bun.

For the decorating I used buttercream, sugarpaste, food colouring pastes, red piping gel and shredded coconut and dark chocolate.
To make the meat patty, I drew a circle slightly smaller than the bun on baking paper, melted the chocolate in the microwave and stirred in the coconut.

Then I spread the mix out on the paper in the circle and let it set.

I Iced the bottom bun with buttercream coloured with brown and red colouring.

I tinted some sugarpaste with bottle green and lime green colouring. I rolled it out thin and tore large pieces of it to resemble lettuce leaves which were layered on top of the bun.

Then I placed the set patty on top. Next to make the cheese I tinted sugarpaste with yellow and orange colouring and cut it into 4 squares which I layered on top of the patty.

I used red tinted sugarpaste cut into 3 circles for tomato slices and placed them on top of the cheese.

Then I squeezed some red piping gel over this to make tomato sauce.

The top bun was placed on top and iced with red/ brown buttercream.

Next I made the chips (fries) by colouring sugarpaste with cream, brown and yellow colouring.

Once I had the colour I wanted I rolled out thick blocks of sugarpaste and cut it into varying sizes, the chips were then shaped by pinching at the ends, slightly squashing some and smoothing the edges.

These were piled up beside the burger on the cake board, then I used piping gel to write the name of the birthday boy in tomato sauce.