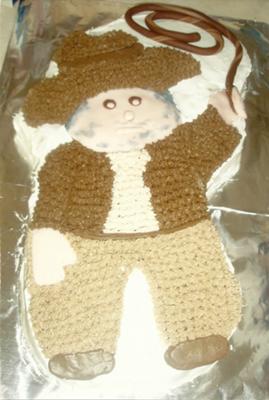 This Indiana Jones cake was for my youngest son, since Indiana Jones is his favorite character, we just had to do a cake shaped like the famous Indy. I started by purchasing a Wilton cake pan named Lil Cowboy.

After my cake had been baked and cooled, I used white decorators icing to completely cover the cake. You have to do this because a lot of the background is not covered with Indy's body.

I had purchased a pack of fondant icing that was pre-colored in different flesh tones. I used the light tan / flesh colored fondant - rolled it out and placed it over the face area in on the cake. Using a tiny bit of gray icing (gray tint mixed with white icing) - I gave Indiana "scruffies" or whiskers on his face - as he is getting a bit older than when he started his crusade - so we had to make him look older.

Using brown icing (chocolate) I piped in his eyes - using tip #3 - which I made wet to look glossy - and using white I made the inside of the eyes using the same tip #3.

His mouth and nose were made of the same flesh fondant - just shaped a bit different. Then using the same fondant color I rolled out his hands and shaped his fingers.

His left hand I had to shape around his whip - which is from the same package of fondant - just a brown and tan mixed together and rolled into a whip and coiled around to look as though he is twirling it in the air.

For his jacket and hat - I used brown chocolate icing - this was just a regular store bought icing - but decorators icing can be used also.

I used star tip #16 for all of his clothing. The strap on the hat was tip #12 - and I just pulled the tip from side to side on the hat. I did the same with the bottom of his jacket.

For Indy's shoes, I just used a regular spatula and chocolate icing and just smoothed it over and wet it down to give it a glossy look.

Overall the cake was a big hit - the boys couldn't believe that Nick actually had an Indiana Jones cake!