It's a Zoo Out There 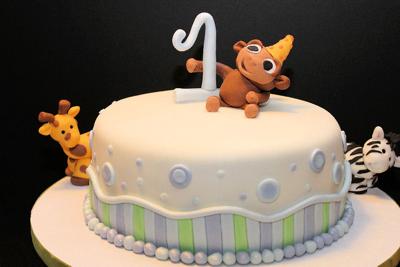 This cake is a ten inch red velvet cake with whipped cream cheese filling, and a vanilla buttercream outer layer. The cake was covered in a layer of fondant; It was made for my son's first Birthday.

It also had a matching smash cake made with green buttercream (grass) and a small white fondant fence wrapped around it with a gumpaste pig wearing a party hat holding up a white candle.

Before even starting to make the cake I made all the gumpaste animal figures ahead of time so they had time to set up and dry. Those were my first attempt at sculpting animals, and it took a lot more time than I originally though, so I was glad that I started them early! I wanted them to look a like little baby cartoon animals, and less realistic.

Each animal section was held together with a little toothpick support to made sure nothing collapsed on itself while it was drying. When I was finished making the animals, I also made the number one by hand, and let it dry so it would be hard enough to stand up on it's own.

Next I took a toothpick and scraped a wavy line across the middle of the cake so I would know where to have the stripes go up to. Next I rolled out the fondant for the strips in each of their colors. I cut them with a pastry brush that has multiple cutting wheels. This way I was able to cut enough ribbon in the same size to make all the stripes going around the cake in one shot- very good time saver!

I then cut the large strips into smaller pieces so they would be easier to handle, and not stretch out or distort. Then I glued them onto the cake with water, and used an exacto knife to cut the stripe off at the line I had marked earlier with the toothpick. I alternated colors, and did this all the way around the cake.

Then I took an extruder and used a small hole plate to make the round border across the middle of the cake- and to cover the tops of the stripes. The dots were made with piping tips in various sizes.

The balls around the base of the cake were cut out with a small round cutter so they would be uniform size, then I just rolled them into shape with my hands, and held them in place with a dab of water. This was also a process that was more time consuming than I thought, so if you are going to make borders like this- add in some extra time to get it done! :)