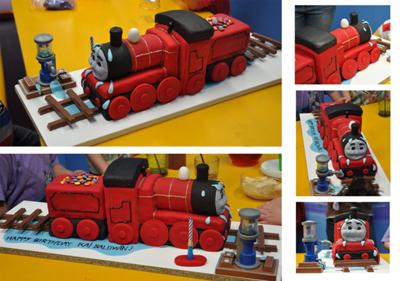 This was my second go at making a birthday cake and using Fondant icing! Wow I'm addicted...

And I also used slabs of sponge cake from the supermarket for the cabin and truck. Much easier to use square slabs instead of trying to cut the cake to get nice square edges.

I cut all my shapes out then butter ice the lot. (I found baking paper underneath the cake shapes was great, I was able to move the pieces around etc)

I then used coloured fondant icing from the shops. Easy and less work. Its ready to just roll out and cover cake.

I used gel icing in a tube to do details on train. Toothpicks to hold different parts together. Just made the cake alot more sturdy.

For the face I had round layer of icing. then I placed a thin layer on top which was white in colour. I then placed a round ball in middle for nose, and two balls of icing in cheeks to puff them out. Next you place a grey layer on top. Cut out the eyes and mouth out of the grey which when placed onto the white layer the whites show through. Then just put two black little round pieces for eye balls, and eyebrows. Kit Kats were used for the train tracks.

Very labour intensive but worth it when my son saw it and his friends. (I think the mums were more impressed to be honest)