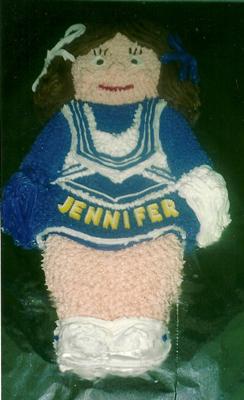 I made a cheerleader cake for my daughter, using the Wilton Baby Doll cake pan. Using a store bought cake, follow directions on the box. I used Wilton's decorator's icing, along with the icing color dye. First I iced the entire cake with a regular cake spatula - completely white.

After this, I used tip number 16 to do a star pattern for the uniform of the cheerleader. The uniform design was taken from my daughter's uniform.

I dyed half of the icing a royal blue color - and using tip #16, star tipped the uniform top and skirt.

I used a cake spatula to smooth the icing for her shoes, and tip #2 for the design on the sides of the shoes and the straight lines on her uniform. Using Wilton's chocolate decorator's icing, I used tip #16 and pulled the hair out to a long, wavy style.

I used the same tip for the ribbons in her hair - just "pulled" them out in long streams to form the ribbons. I used red icing for her mouth and black for her eyelashes, using tip #2.

For her eyes, I used white icing, tip #4, and smoothed it out with water to give it a solid circle look. Using tip #2, with black icing, use water to smooth the center of the eyes.

I finished it off with candy letters made for cakes for her name.