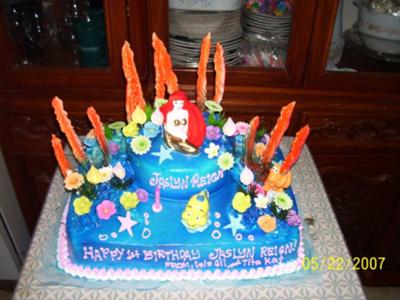 To make this Little Mermaid birthday cake, I prepared and lined a 12x16x3 inch pan and an 8 inch round pan.

Procedure: mix flour, sugar, baking powder, salt, pinch of baking soda in a bowl, then add oil, vanilla, egg yolk , milk and 1 cup water, mix in mixer at speed 3 with a flat beater for 30 seconds. In a separate bowl mix egg whites and cream of tartar until stiff.

Then gradually add 2 cups sugar. Beat at high speed for 1 minute after adding the sugar. Then cut and fold the egg yolk mixture with the egg white until well incorporated. Pour into prepared pan, and baked at 250 degrees centigrade oven for 45 minutes or until when the toothpick inserted comes out clean.

For the design of Little Mermaid, I have here 3 figurines. I made a seaweed out of wire which I covered with foil.

When the cake is done and cooled, I prepared boiled icing. Here is the recipe for the boiled icing:

Put sugar, water and cream of tartar in a sauce pan then boil into running boil. Then beat the egg whites until stiff then pour the boiling sugar gradually then beat until stiff.