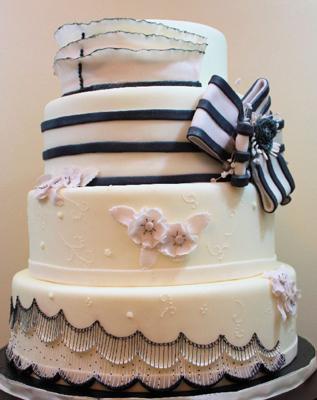 This cake was for a family member who is in love with the movie My Fair Lady. I have never seen it, but she really loved a dress worn by Audrey Hepburn in the movie, and so that was the creative direction I took. Luckily I have a very large family, and got to make it a sizable cake.

I took this opportunity to practice my extension work, which I have never done before this cake. I mapped it out carefully with a toothpick first to make sure I knew where each dot needed to go, and make sure the swags were in the right place.

The biggest tip I have for getting the best consistency of royal icing for the strings is to strain it through a clean nylon stocking before putting it into the parchment bag. This helped get all the little lumps out so there was less breakage of the strings. I still broke about one out of every 6 strings, the longer the string, the harder it was to keep it from breaking. Once you get into a rhythm, it goes a little faster, but it is still a very time consuming task.

I was so nervous about piping the dots on the string work because I was afraid it would break the string, and one or two did break, but I was able to fix most of them. It's a good thing I have pretty steady hands.

All of the accents are fondant; the flowers were made with a rose cutter, thinned out with a ball tool and double layered. Even harder than the extension work for me was the piped scroll work on the side. It was so small and delicate it was difficult to get the scrolls smooth. If I were to do it again, I would probably use a larger tip for the icing, or thin out the icing a little more.

The stripes were black strips laid on a white band of fondant, and attached to the cake afterwards to help keep the lines straight. The seam was made to be on the side so it could be covered by the striped ribbon. The ribbon was attached to the cake with a small wooden dowel and royal icing. I was a bit nervous it wouldn't stay in place because it was a little heavy- but it made it the whole time!

Each of the three layers of ruffles on top were made in two parts, and the seam was concealed with the black dragee pearls. The ruffle effect on the top was made by rolling a toothpick across the top inch of fondant. I then thinned out some gel food coloring and painted the top of the ruffles black to help them stand out.

It is a little hard to see in the picture, but the black band on the top tier, and the white bands at the base of each tier have edible glitter to help the cake sparkle a little. Hope you enjoy!