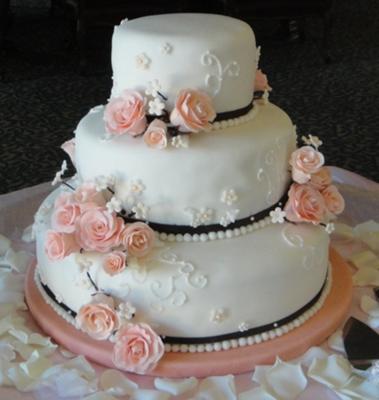 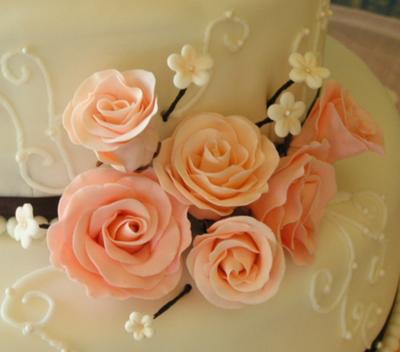 I made this cake for my cousin's wedding! He said he was very proud to be able to tell his guests that his cousin made the cake. It is by far the most complicated cake I have made so far. I prepared as much as I could at home, but the wedding was an hour away from my house so most of the cake was assembled on site.

The bride said she wanted three tiers of chocolate cake, brown ribbons around each tier, and light peach roses that matched the bridesmaids' dresses.

During the three or four weeks before the event, I made gum paste flowers and fondant pearls each weekend. I experimented with white sweet peas but ended up making little white blossoms instead and peach roses.

I was given a swatch of fabric from the dresses, and used a tiny bit of orange fondant mixed with the white gum paste to achieve this peachy pastel color.

I mixed it in two separate batches so there would be some variation in color instead of every flower being absolutely identical.

The roses were formed on plastic Wilton rose bases, dried in stages, and the petals cut out using a circle cutter.

The blossoms were pure white with pearl centers, but I mixed a little orange and white color dust together so the centers would have a hint of the peach color as well.

To match the brown ribbon on the tiers, I wrapped the stems in brown floral tape instead of green.

I used a cutter when making the pearls so they would be as uniform in size as possible, and painted each one with two coats of vodka/pearl dust for shine.

The cake was devil's food cake with chocolate buttercream filling. The tiers were 6-inch, 10-inch and 14-inch sizes and each one was two layers of cake covered in white fondant.

I covered the cake board in a deeper shade of peach fondant and before I went to bed the night before, I had all of the tiers baked, placed on cake boards, covered in fondant, with several dowels inserted in each one.

In retrospect, the cakes settled a bit overnight and I should have done the dowels in the morning instead.

That day, I traveled to the wedding with all of my supplies, stacked the cake, and arranged the decorations. The pearls went on first, attached with a piped line of buttercream (I think I used Tip #5 for that).

Then the brown ribbon was put on and attached with corsage pins. I didn't know until I arrived that the cake would be viewable from all sides, so I arranged the roses in small groupings on the front and back of the cake, with the smaller blossoms in between.

I also piped a thinner line of buttercream/piping gel mixture to create scroll work in some areas... just enough to be elegant but not covering the entire cake.

I also added a few small Wilton sugar pearls here and there on the scroll work. It took about two hours to assemble, and I was baking and fondant-ing the entire day before.

The wedding was somewhat of a stressful day for me, but the bride said it was prettier than the example picture she gave me, which I think is the best compliment I could get!

You won't want to miss these other great pages!