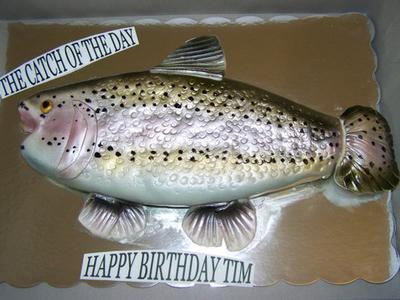 This is a yellow sour cream pound cake. I used a 9 X 13 X 3 inches size pan. My husband carved the cake into a fish shape. Our inspiration was a rainbow trout. We had to adjust and make the fish a little fatter so the it would have more cake in it.

After that, I covered the cake with butter cream icing and smoothed, ready for fondant. I left it alone for a couple of hours on room temperature while I was shaping the eye, fin , gills, and tail of the fish. I Afterwards, I fondant the cake.

I also put the scales by using a drinking straw and making impressions on the fondant; I used the whole circle of the straw. I attached the gills, fin, and tail on the fish. I airbrushed the whole cake with silver sheen metallic color. Then I used the pink sheen color on the middle of the cake as well as the mouth, gills, and tail.

Then, I attached the eye, I painted with a brush using the gold sheen color and put another black color for in the middle of it.