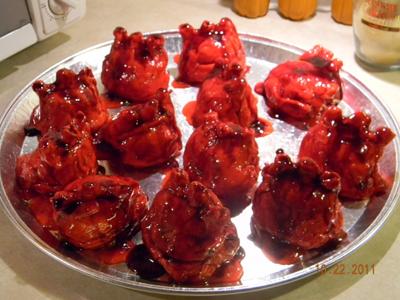 Me and my honey baked up cupcakes for Halloween, no special cake mix needed. After baking let the cupcakes cool. Meanwhile you can either color your fondant red or get your already colored red fondant ready, by kneaded it so it's smooth and ready to be rolled out.

Have some buttercream icing ready to ice your cupcakes. We used red buttercream icing. Roll out some red fondant, enough to cover a cupcake completely, and with a little extra for the valves.

We found out that the more messy it looks, the better it will look in the end. After each cupcake had been covered in icing and fondant, we placed on a serving tray.

We then made homemade piping gel, instead of the store brought kind. But you can probably used it, just not sure of how it will work.

After making the piping gel, we put a little red icing coloring in the piping gel and covered each heart with it. We slowly poured a little over each one, and then used a Wilton paint brush to help finishing covering the heart if needed.

Then the remaining piping gel, we used a darker red or burgundy icing coloring and dizzled over the hearts to give it a two tone coloring affect.