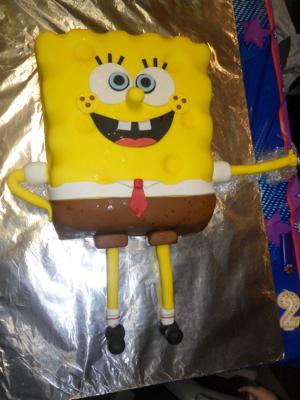 I made this Spongebob Square Pants cake for my son's 2nd birthday on Dec. 18th. Spongebob is one of about 10 words he can say he loves him so much, well he says bob bob :D

I baked 2 half sheet yellow cakes. Because Spongebob IS yellow!

I stacked them on top of each other with no filling and froze for about an hour, covering with seran wrap so they wouldn't get dry.

I carved the sides just a little bit, from the top corner and slanting down to about an inch in from the bottom corner, just so that his head is wider than his bottom.

Then I took the layers apart, filled with strawberry filling and put back on. I dirty iced him in buttercream and covered in white fondant. Yes, I said white fondant. I HATE coloring that much fondant, it's time consuming and messy but you can easily color your fondant yellow then cover him.

I made him yellow by airbrushing him with yellow airbrush paint!

I then took my small Wilton fondant roller and indented all along the edges. I didn't indent the whole sides, just the edges to give him that sponge look.

Then, I used the same small roller's tip to gently push into the fondant creating the "holes" in Spongebob. Be careful not to push all the way through.

I made the arms and legs out of fondant, and pushed a wooden skewer through each one to hold the shape. I should have done his arms and legs a few days ahead of time, not a few hours like I did and they would have tried very nicely, so I'd recommend to do that.

I found a pic of Spongebob online and saved it, cropping out just his face and printed it the size I wanted the face on my cake to be. I cut out each feature and used that as a pattern to cut out my fondant so that Spongebob's face really looked like his face on the cake!

For the pants, I first put the white strip on fondant on, then the brown for the pants. Made a red tie out of fondant too!

Lastly I stuck in his arms and legs! This cake was huge, and really easy, not too time consuming either! It was a huge hit, everyone including my son loved it!!!

P.S. You can see water spots on his pants because I had to carry him through the rain into the pizza place!!!