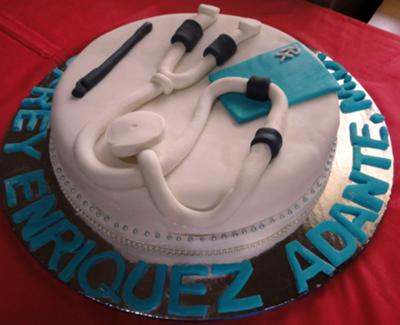 This doctor's cake was inspired by the idea that a former colleague and friend, is finally going to take oath. He toiled hard enough to survive a living—supported her old and ailing parents by being employed and took a leave of absence to continue his quest of becoming a doctor.

He lost his mother before he could take his oath. The absence was fulfilled by his aunts who initiated to give him a thanksgiving party. The cake’s price was cut-off by 40% hearing the story as it unfolds.

The cake drum and fondant was bought in Manila while the white pearl laced around the cake was bought at www.amazon.com. The sky blue edible dragees were sourced in Zamboanga City together with the cake’s major ingredients. All these put into one, makes it the perfect cake for Dr. Godfrey E. Adante.

My cake’s outer surface is one that is a bit crunchy and chewy with a moist inner layer. I used flavorich chocolate powder, all purpose flour, oil and unsalted butter as my main components and baked the 12” x 3” cake for almost two hours. Baking it slow makes the cake very moist retaining the rich flavor of the chocolate. Cooling takes about 3 hours.

I put some natural glaze over the entire surface and sides of the cake so that my white fondant would stick unto it. To cover the cake, I worked about 2 packs of fondant at 2 pounds each.

Rolling was easy with flour dust on both the surface of the working table and the rolling pin. My fancy thought played around as I managed to come up with what to place on top of the cake.

The circle part was funny as I got a polvoron moulder to form it. Something is still lacking. So I put a paper-like blue colored fondant formed into note pad with the letter Rx and a black ballpen. So that made the medical thingy.

Adding the white pearl around with the edible sky blue dragees gave its classy look. The bigger space outside the cake’s dimension was purposely allotted for the doctor’s name. The result was a unique masterpiece the doctor has ever owned.

Mrs. Poloy Pelonia, the doctor’s aunt, was the person who ordered the cake. The positive feedback from her, the family and friends were overwhelming and the picture of the cake landed in the local newspaper with an article written for the new doctor in town.