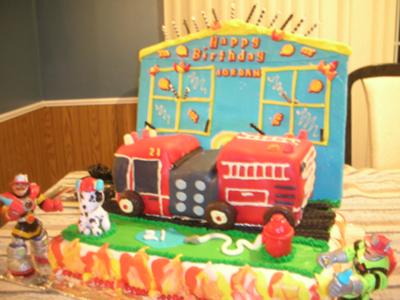 I made this for my brother's 21st birthday. To start with I used 14C lemon cake batter to make a 13x9 inch sheet cake for the bottom. Then I made 2 8x12 inch cakes (also lemon).

I iced the sheet cake with homemade butter cream and used green marshmallow fondant to cover the top.

The sides are white, yellow, orange and red fondant rolled together and cut with a leaf shaped cookie cutter to mimic flames.

I used the leftover to roll beads to go around the bottom of the cake. I used green buttercream frosting to pipe grass around the seam between grass and flame.

The fire hydrant, hose, water and numbers are shaped from fondant.

I used my son's Ranger toys for the firemen. I used black licorice redvines to make the "road" for the fire truck to sit on.

The house facade is a piece of foam cut in the shape of the house and covered in fondant and buttercream decorations.

I put 21 candles on the house..it was great it looked like the house was on fire when they were lit.

The fire truck was made from the 2 8x12 cakes. I cut them both in half lengthwise and stacked them on top of each other (on a foil covered cake board that I score with a pizza cutter to give the impression of the crosshatch on the metal) with buttercream and blueberry filling in between each layer.

The top layer I cut a section out for the utility compartment of the truck. I covered the entire truck with red fondant (Wilton's no taste red created the perfect color.)

I then used black fondant (again using wilton's gel coloring) to make the windows, saltwater taffy for the gauges and hose nozzle, mini chocolate covered donut wheels with buttercream and redhot hubcaps and spice drops for the lights.

I piped on buttercream windshield wipers, a ladder and the rear hose.