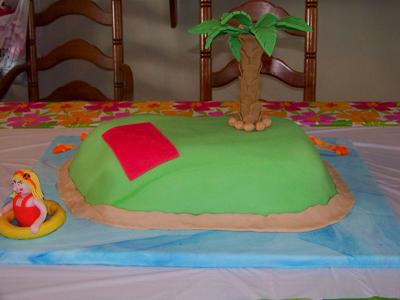 For this tropical island cake, I tinted fondant into three shades of blue then rolled them out together to make it look like water. I covered a 18x24 foam core board with piping gel then with the fondant.

To make the palm tree fronds, I added Gum-Tex to fondant and colored it. I used a basic leaf shape cutter and then cut slits down the sides for added dimension. I draped the leaves, diagonally over the large flower forms and allowed them to dry. I held some of the green fondant in reserve to use to attach the leaves to floral wire later.

The fish were made of fondant, rolled into a football shape. I flattened the front to make a face and rolled out the other end to elongate the body. I attached the fish to the covered board with vanilla. I made the tails by cutting a fondant circle then rolling it out to elongate it. I cut a slit into the tail, going halfway up the circle. I rolled the cut edges to fan them out more and then attached them to the bodies. I used a toothpick dipped in black color to make the eyes and another toothpick, held sideways to make a mouth.

The inner tube is a coil of yellow fondant attached to the board with vanilla.

I made the girl using half fondant/half gum paste tinted a light pink. I rolled a cylinder and made indentations for the arms and neck. I rolled out the bathing suit, wrapped it around the body, trimmed it to fit and attached it with vanilla. Then I attached the body to the board. I made a ball for the head, attaching very small balls for the nose and ears. To make the neck, I rolled part of the head between my fingers. I used the large end of a piping tip to cut out the mouth into a smile. I made small insets for the eyes and added a tiny disk of white fondant. I used a toothpick dipped in black to make the eyes and eyelashes. The cheeks were colored with dry red color. I used vanilla extract to attach the head to the body and inserted a toothpick to secure them together. I used an extruder to make the hair, attaching a few pieces at a time using vanilla extract. I rolled out the headband and the flower and attached them. I rolled out tubes of fondant/gum paste to make the arms, attaching them in the indentations I had made earlier then bending them down to meet the inner tube. They were attached with vanilla.

I attached floral wire to the back of the palm fronds using a small ball of the reserved green fondant and vanilla. I let these dry for three days then attached them to a dowel with floral tape. I used a small, flat ball of green to cover the top of the dowel where it met the wires. I covered the wires/dowel with brown fondant then rolled some out thin. I cut thumb shapes and attached them to the brown fondant. I added some Gum-Tex to fondant and made the coconuts.

The cake is a 12x18 and a 9x13 white cake. Each cake was split, frosted, and stacked. I cut the island shape, making hills and inlets. I covered the cut cake with light green fondant and placed it on the board. I colored fondant to make the sandy shoreline. I rolled out a thick rope and pushed it into the edges between the cake and the board. Using my thumbs I pushed it up onto the cake and out onto the board, thinning out the edges to make a smoother transition and creating texture in the middle.