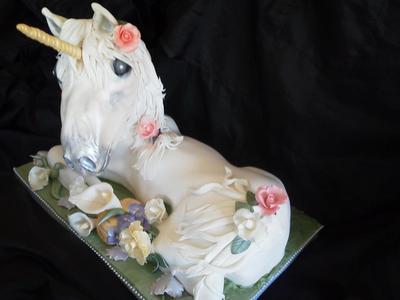 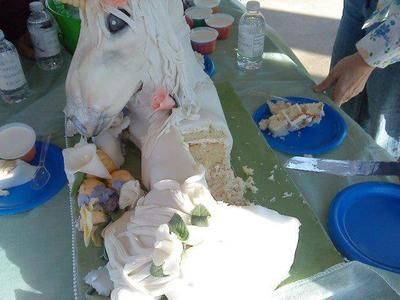 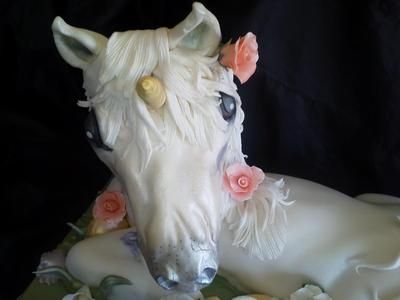 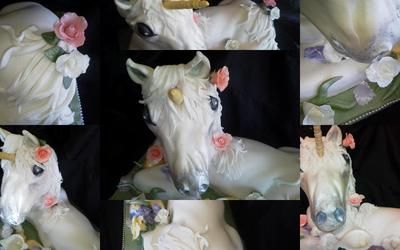 This was made for a friends daughter's 5th birthday party.

To make this cake first I had to build a structure. This was the first structure I ever built and I do things differently now but this one was made with a 3/4 inch dowel and a triangle shaped piece of very thin wood nailed onto it. I cut the dowel at an angle so the head would be tilted down.

To make the head I sculpted it with RKT and coated it with royal icing. After it dried hard I buttercreamed it and applied a thick coat of fondant for sculpting details into it. I made the ears out of gumpaste and attached them with skewers and blended around them. The eyes i made with fondant and painted and sculpted to look as lifelike as possible. I used luster dusts and edible markers to color the face and put her "makeup" on.

The horn was made from gumpaste and painted with luster dust and vodka and attached with a skewer.

The cake was made with 2 13x9 cakes and 3 round 8 inch cakes. I cut the cakes into the shapes I needed and filled and frosted with buttercream.

Then I realized the body was too small for the head so I cut the whole thing in half with a knife, scooted it out to the far sides of the board, and then filled in the belly area with more cake and buttercream. Sometimes, knowing how to fix your mistakes is as important as any other step :)

Then I rolled out one giant piece of fondant and covered her whole body in one piece, legs and all, sculpting it to her as I went, and going back and adding definition where I felt like it should be with my hands.

I placed the head on the platform of the structure and covered the remaining visible structure with "cake spackle" made of cake crumbs and frosting mixed together. I then covered the rest of the neck with fondant and

I made the hooves with gumpaste and painted with luster dust and vodka. I made the mane and tail from fondant rolled out into little ropes and flattened out and ran my shell tool over them to give them the swirly look of hairs. These covered up the areas where the ears were connected and also where the neck and head met, so there is not a noticeable line.

My board was covered in green fondant to look kind of like the grass she would be lying in. Flowers were placed all around her and anywhere there was a glaring mistake :)

Last, I sprayed the whole thing all over with pearl shimmer spray to give it a "magical" sparkle.