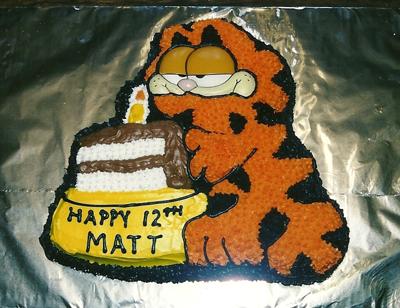 I made this Garfield cake using a Wilton Garfield Cake Pan and Face Plate. I made my oldest son his favorite character. First thing I did for this cake was to fit the face plate in place on the cake, since this is a plastic piece, you need to make sure that the icing covers the sides of it, so that it looks real.

I made the orange icing first using orange tint with white decorators icing.

Mix it together and let it sit for approx. 10 minutes. The longer it sits, the darker it gets. Then once the orange was the right color, I used star tip #16 and piped in Garfield's body making sure that I left room on the cake for all his black spots.

Next, using a lemon yellow tint mixed with decorators icing, I made his food dish. This icing was easy to apply to the cake by using a regular small decorators spatula. Just smooth the icing into place.

Next, using a star tip #16, I piped in the white cake, making sure that the cake was a layer cake. Using regular store bought chocolate icing, I iced the piece of cake. Make sure the you icing the cake to make it look like a regular piece of cake.

I used the same small spatula. Then I used tip #12 to pipe in a large candle in yellow and tip #3 to pipe in the flame of the candle surrounded by white icing piped in star tip #16.

The last color that I did was black. You can try to make your own black using a black tint or you can buy pre-made black icing in the squeeze tubes which is what I did for this cake, as I wanted to make sure that I had the right shade of black and that I had enough of it to go everywhere that was needed.

Using star tip #16, I piped in the rest of the cake, his ears, the spots on his body and the outline of the cake.

Using tip #3, I trimmed his paws and his dish in black, pulling the tip til it looks like one line.

I then used the same tip #3 to write his name on the cake.

Garfield was a big hit! The faceplate can be used over and over. Just a thought, I keep five or six tips in the star #16 on hand, that way you don't have to keep washing them out before you are finished with the cake.