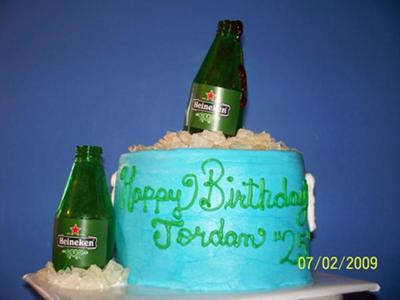 I used the small oval pans for this beer cake. And one cake mix, baked according to directions.

Then place on cake board and ice between layers. After I got the blue icing on and let dry a bit, I used a Viva paper towel to smooth it out.
I used buttercream in blue, white and green.

This is not what I originally intended to do. But I found the directions on a web site explaining how to make sugar beer bottles so I thought it was worth a try.

Everything is edible except for the beer bottle label. I don't have the special printer or ink for that.

I attached the paper label to the bottles with clear corn syrup. And the 'ice' is made of sugar and clear corn syrup cooked in the microwave. Let cool and then I broke it with a meat hammer.

I did this because even though the bottles are technically edible, they are made in a laytex mold. And I read that some people are allergic to laytex and it's better safe than sorry!

I used the # 12 round tip to add a handle on the back of the cake to look like a small cooler.