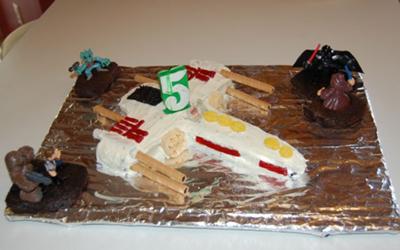 I made this Star Wars cake for my son's fifth birthday.

I baked one box cake mix in a 9x13 inch pan and in a mini bread loaf pan. After letting it cool for 24 hours I cut the main part of the fighter out of the 9x13 cake and then made the wings from the mini-loaf. To make the wings I cut the mini-loaf in half vertically then cut each of those pieces in half through the cake so as to make them flatter and skinnier.

On a cooling rack covered with tinfoil, I positioned the wings near the end of the main part of the fighter and frosted all three pieces with vanilla frosting. While looking at a picture I found on Google images of a Star Wars X-wing Fighter, I decorated it using Cocoa Krispie cereal straws, Twizzlers red licorice, lemon drops, and black frosting. I put a tiny figure of Luke Skywaker from a Star Wars X-Wing Transformer my son had and used a Lego piece for the windsheild.

Surrounding the fighter are the extra pieces of the chocolate cake with my son's Star Wars figures pushed into them.

My sons thought the cake was "cool", and it was a big hit at our family party.