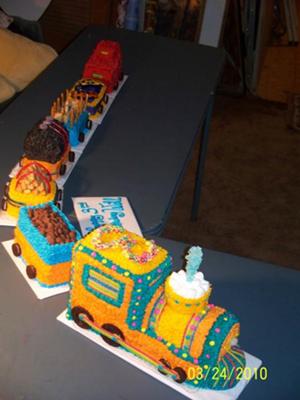 To make this train cake, I used 3 cake mixes and a long loaf pan, small loaf pans and a tube pan.

The tube pan was in the shape of a heart.

I made 3 long loaves and the tube for the engine. I cut the cakes to the shape I wanted. The tube cake was for the top of the engine, that looks rounded.

The smoke stack was an ice cream CONE and I filled it with icing and put small marshmallows on top and added the rock candy sucker in the center as smoke.

All the trim on the engine was candy buttons, Air Heads sour belts, oreo cookies for wheels and the #3 was a Nerd's rope.

The cars were small loaf pans. One car carries cars, another has 'coal' , which is chocolate chips, another car hauls 'logs', which is big pretzels.

Another car has 'animals', which is animal crackers.

Next there is a small 'tanker' and lastly is the caboose.

These are all done in buttercream and some have candy trim.

Another candy I used was pull apart Twizzlers.